Lately, I was wondering why there are very few cases of nasal piercing or ear piericng infection, scars and keloid problem with Indian women. Although, traditional Indian piercing is done in jewelry shops or in the street with less sterile environment and contaminated needle but, the Indian women tend to not have infection or other piercings related problems like keloid, bump and the piercing wound seems to heal faster. 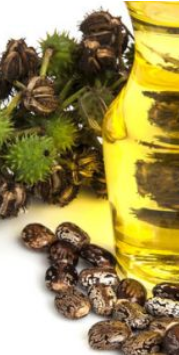 The secret is "no secret" actually! It is the castor oil, like many of Mother Nature’s gifts; Castor oil has many amazing healing properties which is perhaps helped by its ability to deeply penetrate skin and tissue. Based on my personal experience the South Indians apply castor oil daily into the piercing wound and within few days or weeks there is no fuss or problem with their nasal piercing get infected. This method is being practiced for generations and it is time tested.

Castor oil works to inhibit many viruses and bacteria, and as this oil is able to penetrate skin tissue deeply, this makes it an effective treatment for piercing wounds. It’s unrivaled deep tissue penetration help to soften and remove both external and internal scars. Castor oil is able to distinguish between healthy cells and abnormal ones. While it can dissolve abnormal cells in scar and growths, it can detoxify and stimulate the normal cells by increasing circulation.

On another note, castor oil can also prevent scars from forming in the first place. Applying castor oil over cuts or scrapes will promote excellent skin healing.

Castor oil stimulates your lymphatic system, encouraging rapid healing. Amazingly, castor oil seems to make a difference in keloid and bump formation, its ability to break down scar tissue over time, which may make it helpful for keloids and bumps.

Discover other benefits of Castor Oil