A Nose Piercing Gun Does Work?

Is a Nose Piercing Gun or Needle the Best Method? 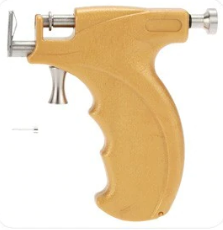 Piercing guns have been used to pierce people's ears in shopping mall jewelry shops and department stores for several dozen years now.  It would be hard not to notice these little boutiques and kiosks while you're walking through a mall.

However, the fact that their employees seem to come and go, and might still be in high school, could cause you to question the adequacy of their training.  As it turns out, although professional body piercers normally are trained extensively for two to three years, these employees may only have received as little as two weeks' training.

How thorough can that really be?  Is two weeks really long enough for an untrained novice to not only learn appropriate piercing techniques, but also the capabilities of different piercing instruments and the intricacies of proper sterilization and safety? Nose piercing gun are myths that are created in these circumstances of inadequate training.

If they were aware of the issue, the training factor alone would be enough to discourage many people from having piercing performed at these locations.  However, the potentially inadequate training is only part of the problem.  Another significant issue is that these mall and department store locations typically use nose piercing guns rather than piercing needles.

Piercing guns are designed and intended to be used only in traditional ear piercing, to pierce the soft tissue of the earlobes. Under no circumstances should piercing guns be used to pierce cartilage located anywhere, including the nose.  Therefore a nose piercing gun is a myth.

The force required for a piercing gun to pierce cartilage - such as when a nostril is pierced - can actually shatter the cartilage.  The result can be a tremendous amount of pain, a lengthy healing period, an increased risk of infection, and even permanent disfigurement due to cartilage damage.  There are many ways a nose piercing using a piercing gun can go wrong, which is why it's actually illegal to use them to pierce cartilage in several European countries and US states. Many professional body piercers would like to see the use of piercing guns totally prohibited because of their risks.

The story is completely different with piercing needles, which are unrelated to sewing needles.  Instead of bashing their way through tissue by brute force like a nose piercing gun, piercing needles have extremely sharp, beveled tips for easy insertion and are similar to the needles used by nurses to start IVs on hospital patients.  Piercing guns are usually made of plastic and cannot be sterilized in an autoclave, which increases the risk of cross-contamination and disease transmission.  Wiping a piercing gun with a sterile pad soaked in antiseptic or alcohol just doesn't do a proper job of sterilization.

Piercing needles, on the other hand, are routinely sterilized in autoclaves, and any component which cannot be autoclaved is disposed of immediately after use.  Autoclaving provides proper sterilization, immediately destroying any blood-borne disease pathogens that might be present on the piercing equipment.

Professional body piercers are trained extensively in the proper equipment to use, the proper operation and sterilization of their equipment, and how piercings can affect the body.  Part of their training includes learning how to avoid hitting sensitive nerves which can cause extreme pain if they are inadvertently pierced or nicked.  These professionals also learn how to prevent cross-contamination of disease and infections.

Not only are they thoroughly trained in how to properly sterilize their instruments in an autoclave, they are also trained to throw away any pieces that cannot be autoclaved, like a nose piercing gun.  They also learn the importance of thoroughly disinfecting all work areas before and after every piercing they perform.

As you can see, using a professional body piercer who uses a piercing needle instead of a piercing gun has several significant advantages.  Needles are just so much better, avoiding the pain and trauma caused by a nose piercing gun and drastically reducing the likelihood of a post-piercing infection or other complication.

Professional piercers might cost a bit more than having your nose pierced by one of those poorly-trained employees in a shopping mall, but they actually know what they're doing and the procedures they use will minimize the risk of pain and infection.  That makes nose piercing performed by a professional with a piercing needle worth a few extra bucks, doesn't it?

From Nose Piercing Gun to the main page about Nostril Piercing