Getting To Know More About An India Nose Piercing

A very ancient traditional, and rather naughty Indian song says,

"Thou, walking behind me, do admire my languidly swaying walk /do admire those long curly, dark tresses of mine/but keep thy eyes open, on the road/because I seem to have dropped my nose ring somewhere/!"

In fact, a diamond nose stud was considered to be a part and parcel of every single young Indian maiden's dowry, and as Kipling said, " The diamond nose-stud that takes the place of the Western patch in drawing attention to the curve of the nostril..." one can imagine how fascinating this ancient piece of jewelry is. 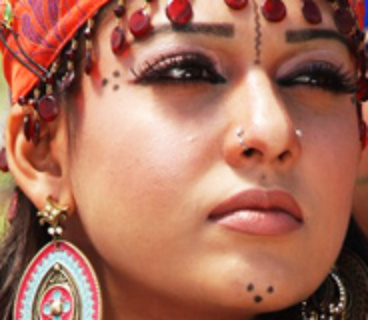 In fact, gypsies all over the world (they supposedly started their travels from central and north India, taking their medical lore with them...) know that piercing the nose and the ears can only strengthen the feminine reproductive organs. This was the reason why Indian gypsies were and still are requested india nose piercing of little baby girls, because they knew exactly where the nerves were and how they could be avoided during piercing. This art is still practiced by experienced goldsmiths, who use a gold wire to pierce the tender nostril of young Indian girls.

Traditionally and in ancient times, the india nose piercing ring was the symbol of virginity in India, Persia, and other Oriental countries. The bride removed her nose ring, after her wedding night, and replaced it with a diamond stud or gold stud, which she would keep on throughout her married life. (Thus the underlying euphemism in the traditional Indian song given above -- The earthy flirty maiden has been indulging in a little bit of slap and tickle in the fields and has lost her nose ring-"laung"- there!)

The Vedic scripts, as well as ancient scripts had plenty of medicinal recipes, because Indian medicine was of a very high standard and standing, more than 7000 years ago. So, just like ancient Chinese medicine, all the herbalists and doctors knew about the different organs and systems and how they could be strengthened by piercing or acupuncture. That is the reason why Ayurvedic medicine advocated the piercing of your left nostril to stop one from suffering over much during childbirth or from cramps.

The West still considers a pierced nose to be a symbol of rebelliousness, thanks to the idea that only hippies and rebellious teenagers pierced their facial appendages! But when conservative people can get their ears pierced, why cannot they extend the same courtesy to their noses? Just imagine a discrete blend of stylish gold and diamonds in a nose stud or nose ring in exquisite good taste, to add that extra bit of glamor to your outfit, for a gala occasion. Hey, it does not have to be a solid traditional Indian nose ring called a Nathia or a Pullakku- weighing about 20 -50 g of silver or gold -- coming down from mother to daughter, unaltered, for the past 3000 years!

However, you can get a variety of stylish nose rings for daily wear, glamorous occasions, or just to express your personality in a stylish manner. Nose studs are called "Koka" or "laung", and either have discreet diamonds to glint at your conservative detractors, or other tiny precious stones to weigh the silver or gold down. 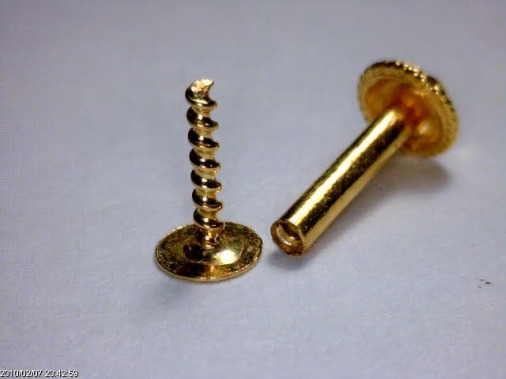 A nose stud is going to have a screw type fixture, which means that you are never going to lose your "koka" even if you find yourself sneezing away voluptuously during the winter. A diamond nose ring, long chandeliered dangling rings, along with rings and hand jewelry over the back of the hand, bracelets, anklets, and a gold belt around one's slim waist are part and parcel of the Indian woman's arsenal of jewelry. So beguile, entice, bewitch and fascinate the people around you with a stylish nose ring or nose stud in the traditional swan or lotus design. Source India Gold Jewelry

Your nose ring can be as simple as a little thread of gold. Your nose stud can be as elaborate as a huge penny sized beautifully crafted gold design. The more complex and traditional nose ring designs are used in India on religious and cultural occasions. So, it is tough luck, that your mother could not hand down her ancestral nose ring to you. But never mind, start a tradition; start a collection of delectable, glamorous, fashionable, and stylish nose rings and nose studs to be passed on to the future generations right away!

And no, an india nose piercing does not hurt at all, because every single jeweler crafts it so carefully that the design or the material is not going to irritate that sensitive "skin of(f) your nose"!